An Open Letter to Nonprofit Marketers 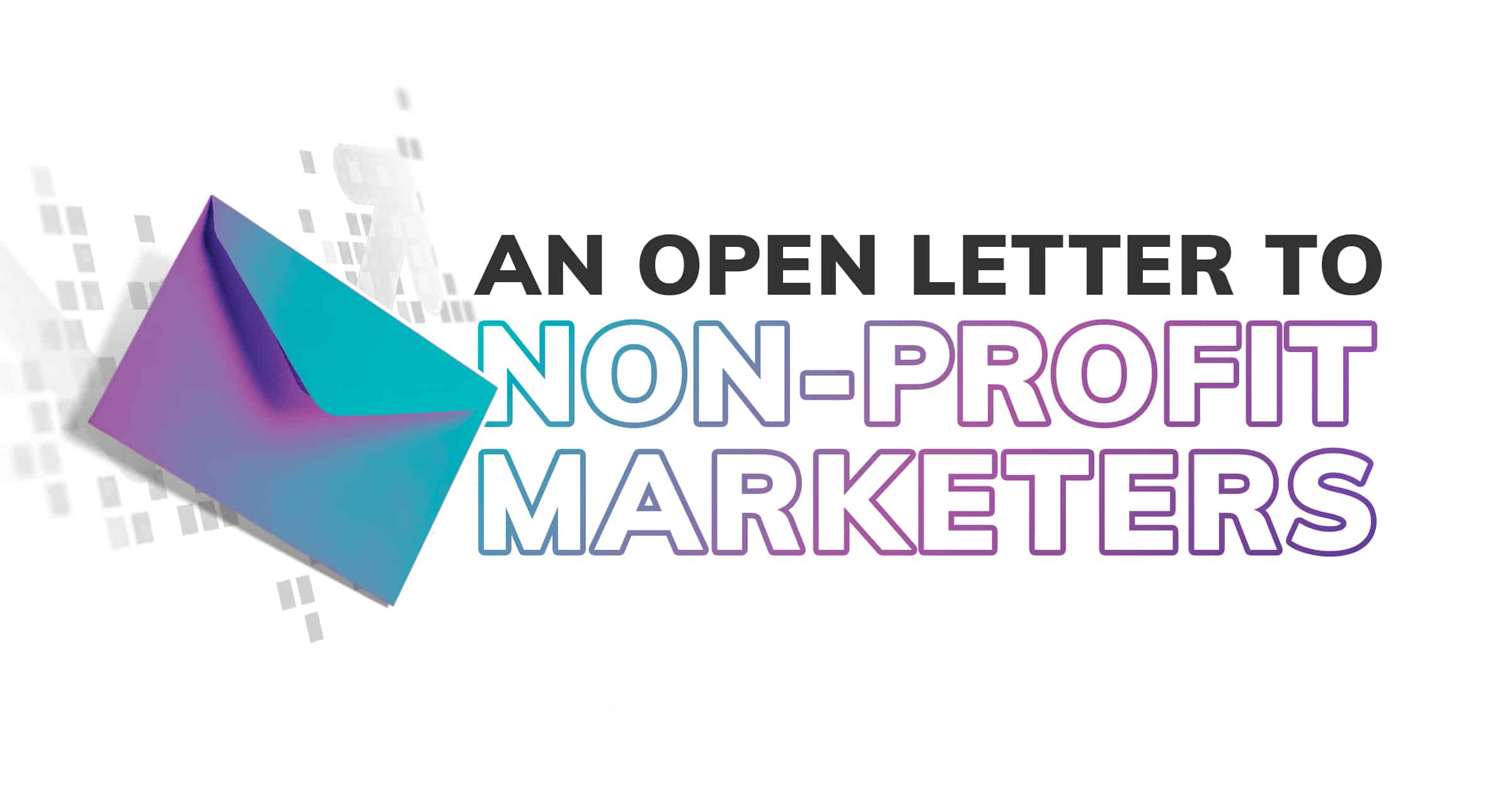 An Open Letter to Nonprofit Marketers and Leaders. From Me, Matt Sabljak

You know the work you’re doing is vital. If your organization didn’t exist, more kids would suffer. There’d be fewer jobs for people with disabilities. Art—the kind that changes lives—would never happen.

But you’ve got an awareness problem—a marketing problem: nobody knows who you are; nobody knows about the vital work you’re doing.

If only they knew, they’d volunteer, they’d donate, they’d join the board—they’d do something.

But here’s the real problem: Nobody cares.

Nobody cares because you haven’t given them a reason to pay attention in the first place. Let’s change that…

First, get your mind right: you compete with everyone, even me.

No matter how unique your cause, we all compete with each other in the attention economy. Right now, one of your potential funders could be reading this Dispatch rather than your email newsletter. More likely she’s scrolling through pictures of her grandchildren on Facebook and misusing the comments feature. Point is: you have to be more interesting, pointed and relevant than everyone else—if only for just a moment—to capture the attention you need. Nobody has said it better than Roy H. Williams aka “The Wizard of Ads”… “You must offer a thought more interesting than the one currently occupying your customer. The human mind discounts the predictable.”

Pick one audience above all as the focus of your marketing.

We know that you have individual donors, institutional funders, community partners, volunteers, the people whom you serve, the families of the people whom you serve, your own employees, etc. And we know that they all matter; you’d never pick a favorite child. But they don’t all matter equally when it comes to growing the impact of your organization, so they can’t all matter equally when it comes to prioritizing your marketing budget. If growth is your goal, ask, “Where does growth begin?” More funds? More volunteers? Speak to that audience first.

Warning: the tough choices have only just begun…

Boil your mission down to a one or two-word phrase and focus everything you’ve got on owning that in your audience’s mind.

You must identify and then strive for a one or two-word position in your most important audience’s mind because it’s the only enduring way to drive growth without spending more on marketing every year.

I know it seems limiting or maybe even impossible to reduce your mission down to two words, but if you don’t, your audience won’t either, which means they simply won’t have a spot for you in their mental Rolodex; our minds are too crowded.

There’s an infamous blood feud between The Hunger Task Force and Feeding America in Milwaukee—we’re talking Hatfields and McCoys. Could it be because they’re both competing for the same word in the same people’s minds—“hunger”?

Emotion is the tip of your spear, not logic.

“Human beings don’t fundamentally operate from a place of logic and reason. We function from a place of emotion.” Yet many nonprofit leaders appeal to logic first and emotion second in their marketing campaigns:

Stats, scope and impact matter, but they don’t demand attention or break through the noise the way emotional stories do. That’s why the local news operates on the “if it bleeds, it leads” model; nobody watches school board meetings when local tragedy is a click away.

Emotion resides in personal stories: how has your organization impacted one person? Sheila, let’s call her Sheila. How have you changed Sheila’s life? Tell Sheila’s story—before and after. The beauty of this approach is that you draw power from parts of Sheila’s life that have nothing to do with your organization because you’re the one telling the story. It’s transformation by association.

And don’t worry if Sheila’s story only touches on a part of your organization or mission; just focus on the feeling. To borrow a phrase from product marketing: “Focus on the benefits, not the features.” Will your audience feel Sheila’s transformation? Will they walk away from this experience with a clear story in their head—”That organization transforms lives?” That’s where the power is. Don’t make them work for it. Serve it up for them on a platter.

Somebody you know has a newish iPhone with a camera feature called “Portrait Mode”; look what it can do.

You no longer need a photographer or special equipment to produce beautiful, powerful portraits. Start there. This could be Sheila!

Mammals are hardwired to respond to the faces of other mammals.

Of course, video is even better. Again, if you don’t want to invest in Hollywood big shots like SRH, get that newish iPhone again or even record a Zoom interview with Sheila.

Finally AND MOST IMPORTANTLY get out of the way because you’re blocking the view.

One of the most impactful nonprofit events I’ve ever attended was a panel hosted by The Boys & Girls Clubs of Greater Milwaukee. Here’s the catch: the panelists were young ladies from the local Club—a six-year-old, a twelve-year-old and an eighteen-year-old.

Someone from The Clubs fired questions at them and the ladies did the rest. It was magical. It was hilarious. It was inspiring. It was free. Ten years later I’m still talking about it.

Point is: get out of the way of your most potent storytellers, who are almost surely the people you serve. Don’t worry if they’re unpolished, or nervous, or in kindergarten.

Nobody can make us care like the people for whom you’ve cared.

Now get out there and make some magic happen.

Remember: you deserve this attention.

And… of course, we’re here to help.